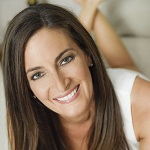 Andrea Vecchio is an entrepreneur, published author, Emmy® nominated journalist, philanthropist, and life strategist. Andrea began her career as a television broadcaster at ABC in Cleveland, working for the legendary talk show The Morning Exchange. During this time, Andrea had an early taste of things to come when she received an out of town assignment to interview Academy Award winner Tom Hanks. From there, Andrea began working as an entertainment reporter for NBC Cleveland. This new work assignment was an opportunity for Andrea to travel the world, interviewing hundreds of Hollywood's elite; including Robert DeNiro, Anthony Hopkins, Meryl Streep, Halle Berry, Denzel Washington, Russell Crowe, George Clooney, Julia Roberts, Matt Damon, Jennifer Aniston, Justin Timberlake, and more! In 2005, Andrea began her dual job as a television host and senior producer when NBC Cleveland launched Good Company, a weekly, one-hour talk show. Andrea's passion for film led her to become a film critic and member of the Broadcast Film Critic's Association. During her time with the BFCA, Andrea was a voting member for The Critic's Choice Awards. And in 2011, while Marvel was filming The Avengers in Cleveland, Andrea was chosen by the movie studio to film a scene for the blockbuster movie (playing a news reporter). The Avengers went on to gross over $1.5 billion worldwide. Many of Andrea's assignments took her all over the globe, including Los Angeles, London, Toronto and Bora Bora. It was in New York City that Andrea shot a television special, Broadway Series: Sneak Peek. This half hour special brought Andrea her first Emmy® nomination. Soon after her Broadway Series special, Andrea was asked to guest star in the national tour of Chicago during its run in Cleveland. After 20 years in broadcasting, Andrea pursued her dream of a writing a book. In 2014, her first book, Live Your Playlist: How to Get Your S#&! Together One Song at a Time was published. After speaking to thousands of people through a camera lens every weekday, Andrea is now in demand as a keynote and motivational speaker. In 2016, Andrea co-created the successful digital series, Driving Cleveland, which she hosts and executive produces. The series features conversations in cars with exceptional people who are driving entertainment, innovation, productivity, and revenue in Cleveland. As a philanthropist, Andrea has raised thousands of dollars for the Make-A-Wish Foundation, Susan G. Komen, and other charities that empower women. Through her work with Make-A-Wish, Andrea was honored as a W.I.S.H (Women Inspiring Strength and Hope) inductee. Andrea received her Bachelor of Arts degree from The Ohio State University. She continued her education by attending Harvard Business School's program, "Negotiation Mastery: Unlocking Value in the Real World." Andrea has been featured on the covers of Cleveland Magazine and Westshore Magazine. You can follow her Live Your Playlist Blog and get more information on www.AndreaVecchio.com. @andreavecchio
REGISTER NOW
View full schedule