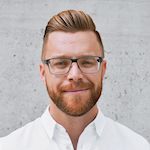 Michael Barber is an award-winning creative and marketing strategist. Over the last year, he has worked with brands like MeUndies.com, Johnson & Johnson, Church & Dwight, and Hass Avocado Board amongst others. Previously, he was the Senior Vice President, Chief Creative Officer at Godfrey, one of the largest B2B agencies in the country. He began his career at Mighty Interactive, the digital shop founded by Jay Baer. Mighty was one of the first agencies to leverage the future email behemoth ExactTarget, ultimately helping the organization develop its ad agency offering before it was acquired by Salesforce for $2.5 billion. Michael went on to lead strategy and planning at Sitewire, Nomadic Agency, and COHN, before founding his own consultancy, barber&hewitt.

In late 2017, barber&hewitt joined Godfrey and was named one of Marketo’s Fearless 50, which recognizes the top marketers around the globe driving bold, fearless, marketing and digital transformation. His work was featured in The New York Times, The Wall Street Journal, and Forbes. That work was awarded numerous industry awards, but more importantly, drove successes including the most effective and cost-efficient campaign in the history of a Fortune 500 company, a 160x return on ad spend, and 10 million earned media impressions within the first month of a new product launch.

Outside of his work, Michael hones his unhealthy obsessions with donuts, cold brew, airplanes, BMWs, the Arizona Wildcats, and spends time with his husband and dogs.
REGISTER NOW
View full schedule