Joe Lazauskas: We Strapped Neurosensors to Voters and Showed Them 2020 Campaign Ads

Each week on the Content Marketing World blog, we’re going to feature a CMWorld 2020 speaker, one of their blog posts that dives into the topic they’ll be covering at CMWorld, and a few additional articles they’ve written to help you prepare for their session.

Today, we’re keeping the series rolling with Joe Lazauskas, a CMWorld top-rated speaker and more importantly, a genius in breaking down the science of memorable content. We hope you enjoy this one!

In many ways, 2020 is shaping up to be the advertising election —and neuroscience could play a surprising role. Political media spending is projected to hit a record $6 billion in the 2020 cycle. Michael Bloomberg and Donald Trump have both bought Super Bowl ads. Elizabeth Warren spent$10 million on TV ads in early states. And Bernie Sanders spent $30 million on TV ads across four early states.

As authors and media reporters who have studied the power of storytelling and how people establish strong connections with one another, we were curious about how political ads really affect voters. We’ve been following a trend called “neuromarketing,” which uses brain-tracking technologies to test how people respond to ads. Adoption of this relatively new technology has grown over the last couple of years and is used by major brands, agencies, and entertainment studios.

So in November, we asked a neuromarketing firm called Neuro-Insight to let us use its Steady State Topography (SST)-based neurotracking technology to independently test how primary voters are subconsciously responding to the ads. Our focus was on the three top-polling (at the time) Democratic candidates: Joe Biden, Elizabeth Warren, and Bernie Sanders.

We equipped 53 registered Democrats in New York with SST caps and observed their brain patterns as they watched episodes of NCIS and Modern Family. This gave us a baseline of what each participant’s brain activity looks like. (Participants did not know the purpose of the study.) Then, during commercial breaks, we inserted ads that were representative of each candidate’s standard pitch and tone in their ads and on the stump.

We watched changes in participants’ brain activity during the ads and tracked their second-by-second responses to them using four metrics: long-term memory encoding (which is highly correlated with decision-making); engagement; whether a subject experienced positive or negative emotions; and the intensity of those emotions. (See the full methodology here.)

The results gave us a fascinating glimpse into what truly resonates with voters. Their emotional responses to the ads may help explain areas where Warren’s campaign had exceeded expectations or the reason so many voters were sticking with Biden despite his many gaffes and rocky debate answers. Several findings even defy conventional wisdom underlying traditional political ads, showing that what’s actually going on inside the heads of primary voters would likely surprise even today’s big political spenders.

The participants’ engagement peaked when candidates shared their personal stories. Biden’s ad showed a great example of this. It opens with a nostalgic narrative of his life in Scranton, Pennsylvania, triggering a very strong emotional response in our participants’ brains. 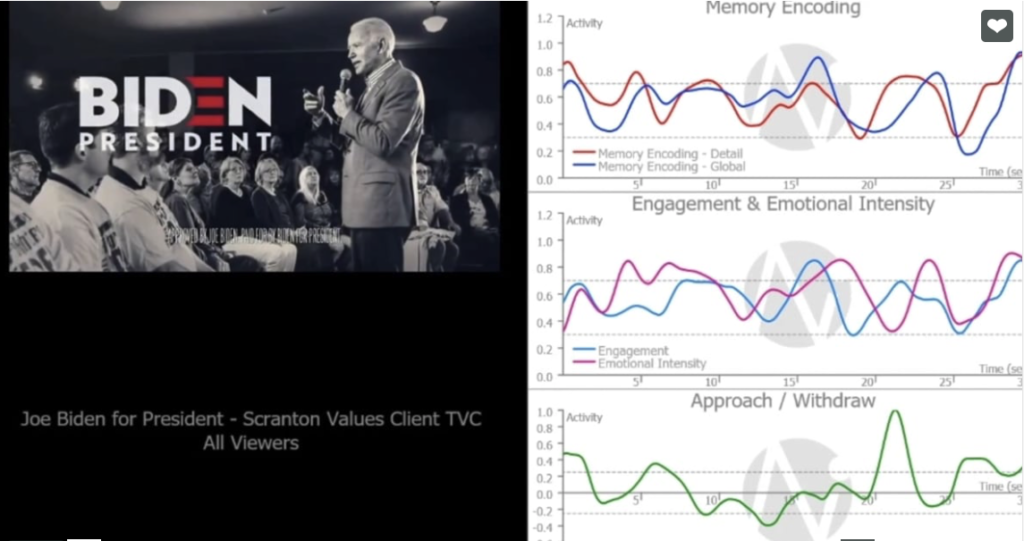 Perhaps this shouldn’t be surprising; Biden’s connection to voters as a “retail politician” is considered one of his greatest advantages. Old black-and-white photos of a young Biden drive up the emotional response, as do images of him personally comforting voters. His end “branding” — the shot of his logo — also works very effectively, scoring in the top 87th percentile of all the ads that Neuro-Insight has tested. This indicates that this will be a memorable ad and that people will remember “Biden” when they think of it.

But while Biden’s personal narrative triggered a strong response, his message did not. We see a strong dip in both emotional intensity and memory encoding at the 17-second mark, when the ad hits on a fairly generic message about the working and middle classes.

Psychology research tells us that people tend to use logic to justify how they feel rather than the other way around. So our neurodata may help explain Biden’s staying power despite gaffes and rocky debate performances. His stories and delivery evoke warm feelings in people’s brains — and that’s hard to shake.

Warren has unlocked the key to selling her brand

Responses to Warren’s ad show how sexism may factor into views toward a campaign — but also the pathway for female candidates to overcome those biases. Warren’s ad generated a low emotional response. While we initially thought this was a bad sign, particularly in contrast to Biden, Neuro-Insight analyst Isabel Goldstein notes that a lack of emotion could actually be a factor in Warren’s superior performance compared to other female candidates. 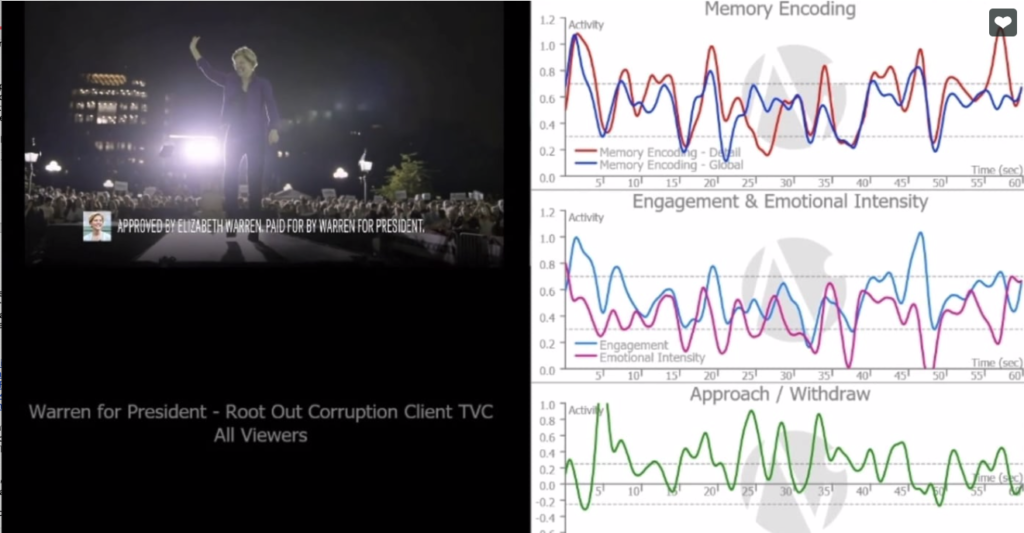 By not provoking emotion, Warren may be preventing voters from viewing her through a stereotypical filter. With emotion left behind, voters may be hearing out Warren from a logic-first standpoint. This hypothesis is certainly worth further study.

Impressively, Warren’s ad has three separate branding moments that scored in the 90th percentile of Neuro-Insight’s ad database — the 25,000+ consumer ads the company has done these kinds of studies on for things like the Super Bowl and prime-time TV commercials. People engaged with and remembered Warren’s ad the most — even though 20% of respondents said they had “no opinion” of her in the pre-test survey we administered. Throughout her ad, Warren highlighted key messages on the screen in bold text overlays, and these triggered high levels of memory encoding. Her catchphrase, “I got a plan for that,” was a particularly strong branding moment that scored in the 98th percentile of all ads Neuro-Insight has ever tested.

Warren also pioneered a novel approach to how her ad was structured, turning a typically boring moment into a positive one. All metrics began to fall when Sanders and Biden said the obligatory, “I’m so-and-so, and I approve this message.” In contrast, when Warren started her ad with this statement with her name in large text over a photo of herself, engagement and memory encoding immediately shot up. Then, Warren was able to end the ad on a powerful image of her in front of an adoring crowd, instead of with the disclaimer. Candidates would be smart to adopt Warren’s disclaimer tactic.

These findings may factor into Warren’s steady climb in popularity, exceeding initial expectations in the race despite worries about “electability” and the challenges unique to female candidates in U.S. politics. Perhaps it’s because she’s so good at delivering a memorable message. Had she not dropped out of the race, Warren’s campaign might have continued to gain support by doubling down on these branding tactics as the primary heated up.

The Sanders ad, which was devoid of a strong narrative arc, turned out to be the least memorable or engaging for respondents. It scored the lowest of the three tested. His branding peak scored in just the 35th percentile of all ads. We saw low levels of memory encoding, engagement, and emotional connection during the bulk of the ad, which focuses on shots of Sanders speaking, and b-roll of working-class people. 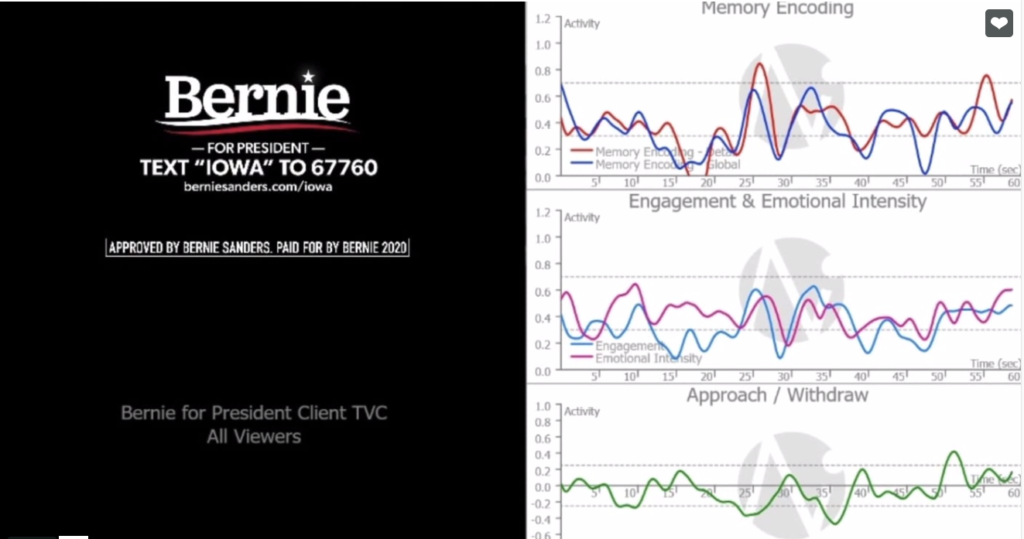 Moving forward, Sanders would have been wise to spend time telling voters about his personal story as a champion for workers’ rights over many decades. His ad hit a peak when it touched on how Sanders has “taken on” Wall Street and the pharmaceutical industry. His strongest moment came when he hammered the point that he will be a “fighter” against negative forces.

His ad also showed the double-edged sword of turning negative in attacks. Both Sanders and Warren went on the attack against Trump and Big Money. But because Sanders had low memory encoding, viewers were likely to leave the ad with little more than a negative feeling. Without his messaging of being a fighter, voters who may not already be on board with Sanders could walk away from his message with a bad taste in their mouths. Previous research by Neuro-Insight shows this can actually cause viewers to associate whoever’s behind the ad with a negative feeling rather than the thing that was being attacked.

Other candidates in the race — and future political contests — should learn from this key finding as well.

Democrats can learn a great deal from neurotracking

Findings from our study provide many useful tips for Democratic candidates to adopt. For example, branding Trump as “corrupt” proved to be an effective attack. When the Warren ad showed a conspiratorial image of Trump and associates with the word “corruption” overlaid, engagement and memory encoding were very high. This backs up other findings from Crooked Media’s polling with Change Research, which also found that key messages around Trump’s corruption are highly effective at moving voter opinion in favor of impeachment.

Contrast that to the Sanders ad, which showed Trump at a podium and called him a “dangerous demagogue.” Test subjects felt negative emotions in response. Unfortunately, they encoded little to memory when they heard this phrase and saw this familiar scene. This underscores the importance of personal narratives. Imagery of candidates with voters — or voters responding powerfully to candidates — wildly outperformed stock imagery of voters. While political ads commonly show footage of working people, presumably in hopes of relating to voters, our test subjects completely lost interest during these moments. But shots of Biden hugging a tearful supporter or sharing a smile with medical workers were both memorable and positive. So were images of voters responding emotionally while hearing a candidate speak. And when Warren and Sanders faced giant crowds under rockstar lighting, participants’ brains lit up dramatically.

The social proof of seeing candidates with people was more powerful than just seeing target voters. Candidates should leverage these images and moments in their advertising as much as possible. For instance, Warren’s campaign would have been smart to leverage her tearful and authentic exchange and hug with an Iowan teen in December.

Campaigns should be mindful of what they can learn from looking at their supporters’ brains. As we’ve followed the neurotracking space, watching companies like Neuro-Insight, Spark Neuro, and Immersion Neuroscience, our sources in the industry have told us that the Republican Party has been eager to court this new technology — but Democrats have not.

We recognize that using such tech may open up an easy — albeit deceptive — line of attack. (“A candidate is spying on your brains!”) But what might neurotechnology teach us about, say, Pete Buttigieg’s unexpected rise? Or Kamala Harris’ surprising decline? Or Andrew Yang’s voracious fandom?

Ultimately, the candidate who wins the nomination should want to know everything they can about what truly resonates with voters. And some of those insights may only be gained by measuring the subconscious.

Looking for even more from Joe? Check out these three blog posts that will help you dive deeper into the science of memorable content and prepare you for his CMWorld workshop:

Register today for Content Marketing World 2020, where you’ll hear from Joe Lazaukas and 150+ other incredible content marketing leaders. Use SPEAKER100 to save $100 off your pass!